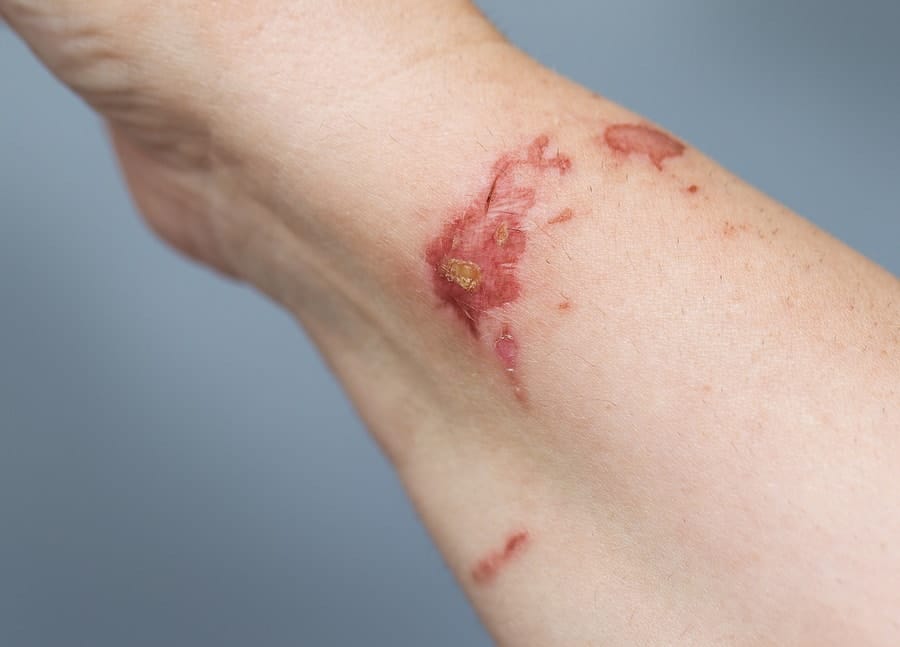 Essential oils for burns have been helping humans recover from burns and soothing our injuries for almost as long as recorded history.

Thousands of years of use have proven these oils to be an effective natural remedy for burns.

There are several particular essential oils that are quite valuable in treating burns in either alleviating burn pain, assisting with healing, inhibiting infection or reducing scarring.

All of them are readily available, and most are quite affordable as well. French chemist René-Maurice Gattefossé coined the term aromatherapy.

The story is that he burned a hand badly in his lab and plunged it into a container of lavender oil, not because he believed lavender could help but because it was the nearest thing available at the time.

Gattefossé claimed that healing was quick and very nearly painless, leading him to investigate the burn healing effects of the lavender oil.

For decades, the leading essential oils to use in treating burns have been lavender and tea tree (Melaleuca) oils.

In more recent years, other oils have come to be recognized as being valuable in use for burns.

By far, lavender, Melaleuca (tea tree) and geranium oils have been the subjects of most scientific studies.

Lavender is an obvious choice for research on the basis of Gattefossé’s 1910 experience and 1937 publication.

Tea tree oil is simply a given but also has been the subject of many scientific studies concluding that it’s highly effective in warding off infection while helping the burn to heal.

Geranium oil is a natural insect repellent, but researchers have found that it’s also effective in contributing to burn healing while also resisting the bacterial infection so common with third-degree burns.

While lavender is valuable in treating the actual burn, it also affords the burn patient with emotionally soothing effects that can be so beneficial when suffering the traumatic effects of a major burn.

The use of lavender oil is appropriate for any class of burn including third-degree burns.

Because it also positively affects mood and anxiety, it also can help to calm the burn patient even as it actively inhibits infection and promotes healing.

It also supports sound sleep and helps to alleviate pain, both of which can be invaluable for burn patients.

Melaleuca is the genus name of the tea tree plant, Melaleuca alternifolia.

The essential oil is known by both Melaleuca and tea tree oil.

Melaleuca is nearly the be-all of essential oils! It is antibacterial, antimicrobial, anti fungal and almost instantaneously takes the sting out of insect bites.

It is a star of burn treatment. In fact several scientific studies have concluded that Melaleuca oil not only inhibits infection but also directly promotes healing.

It can simultaneously soothe burns while also protecting damaged skin from bacterial invasion and infection.

Only non-sensitive noses can appreciate the aroma of pure geranium oil.

It is invaluable, however, in treating burns and guarding against burn-related infection.

In 2004, researchers found that in treating severe third-degree burns, a combination of grape seed extract and geranium oil was highly effective in combating MRSA because of the blend’s highly antibacterial effects.

The same researchers found that a combination of geranium and tea tree oil was most effective against methicillin-sensitive S. aureus.

It made no difference whether the tested S. aureus bacteria was methicillin-resistant or methicillin sensitive. Geranium oil was effective against both.

Geranium oil has other benefits that also can serve burn patients.

In addition to guarding against or actively combating infection, geranium oil also has been shown to relieve stress, reduce depression, improve circulation, reduce blood pressure and minimize inflammation, all of which are beneficial to burn patients.

The word “frankincense” arises from an old French term, “franc encens,” which translates to “quality incense.”

The oil originates with the resin of either Boswellia carterii or Boswellia sacara, both of which are common trees in Somalia.

Frankincense oil has been known literally for millennia; it was one of the gifts the wise men took to Jesus after His birth.

What we’ve discovered about the qualities and value of frankincense oil is much more recent, however.

What we know is that frankincense oil has antiseptic properties, has stress relieving abilities, alleviates coughing due to cold or flu, helps with inflammation and pain, and may decrease the appearance of scars.

While its stress relieving properties are beneficial to burn patients, frankincense can reduce inflammation and the appearance of scars that may be of most significant benefit to burn patients.

Scarring is not an issue with first degree burns, and it may be only of minor concern with second-degree burns.

Scarring is a major factor when third-degree burns have occurred, however.

Those who have suffered and survived extensive third-degree burns are often permanently scarred with thick, heavy skin “deposits” that mar areas of previously burned skinned.

Frankincense oil can directly help to reduce the development of those heavy scars and reduce the appearance of smaller ones.

Peppermint oil is a wonderful pain reliever that also can reduce inflammation.

Its greatest value concerning treating burns likely is for first degree burns in that it helps to “reduce pain and improve burns by soothing inflammation” (Axe, Rubin and Bollinger, 2016, p. 275).

Straight peppermint oil may be too strong to apply directly to burned areas. If that’s the case, then mix it with a carrier oil such as coconut or almond oil.

Diluting the peppermint oil with a carrier oil delivers peppermint oil’s benefits while minimizing the effects that may be too dramatic for sensitive burned skin.

Heat aloe and the coconut oil; remove from heat then add the essential oils.

Transfer to a spray bottle, cool and then spray on the affected area as desired.

Another approach is to mix about three drops of peppermint oil with a tablespoon of aloe vera gel and then apply directly to a first-degree burn.

Peppermint by its very nature is quite cooling as well as healing; aloe also is wonderfully healing for burns. The combination is cooling, soothing and healing.

Eucalyptus oil could be a good addition to Dr. Axe’s homemade sunburn spray because of its natural cooling properties.

It’s likely to be too strong to use directly on a burn, however.

Dilute a few drops of eucalyptus oil with aloe vera gel or a carrier oil such as fractionated coconut oil or sweet almond oil, then apply directly to the burned area.

Eucalyptus oil has some healing properties, but its greatest benefit for first or second-degree burns is its cooling ability.

In addition to his sunburn spray described above, Dr. Axe also provides a burn salve recipe for a remedy for burns that may progress past the simple sunburn.

Mix well, and then apply liberally to any burn wounds. Cover the area with a dressing or adhesive bandage.

An old tale that medical science debunked decades ago was that the “best” treatment for burn was to put butter or oil on it right away.

Of course, we know now that is very nearly the worst first treatment for a burn. The first step should be cool temperature water to remove the heat.

After that, the application of essential oils is greatly beneficial. Don’t let the “oil” term scare you away from using highly effective essential oil treatments for burns.

There are other essential oils that can be beneficial, but the ones discussed above are the most directly effective concerning healing, cooling and comforting.

We’ve had these compounds available to use literally for centuries, but it has been only over the last several decades that we’ve begun learning just how valuable they are.